Home
▲ ▼
Many of the images displayed on this site are copyrighted, and are used here only for introduce the artists and their works. All rights are reserved by the artists who created the works referenced herein.
Home Aura

The Leshan Giant Buddha (乐山大佛) was built during the Tang Dynasty (618–907AD). It is carved out of a cliff face that lies at the confluence of the Minjiang, Dadu and Qingyi rivers in the southern part of Sichuan province in China, near the city of Leshan. The stone sculpture faces Mount Emei, with the rivers flowing below his feet. It is the largest stone Buddha in the world and it is by far the tallest pre-modern statue in the world.

The Mount Emei Scenic Area, including Leshan Giant Buddha Scenic Area has been listed as a UNESCO World Heritage Site since 1996. It was not damaged by the 2008 Sichuan earthquake. 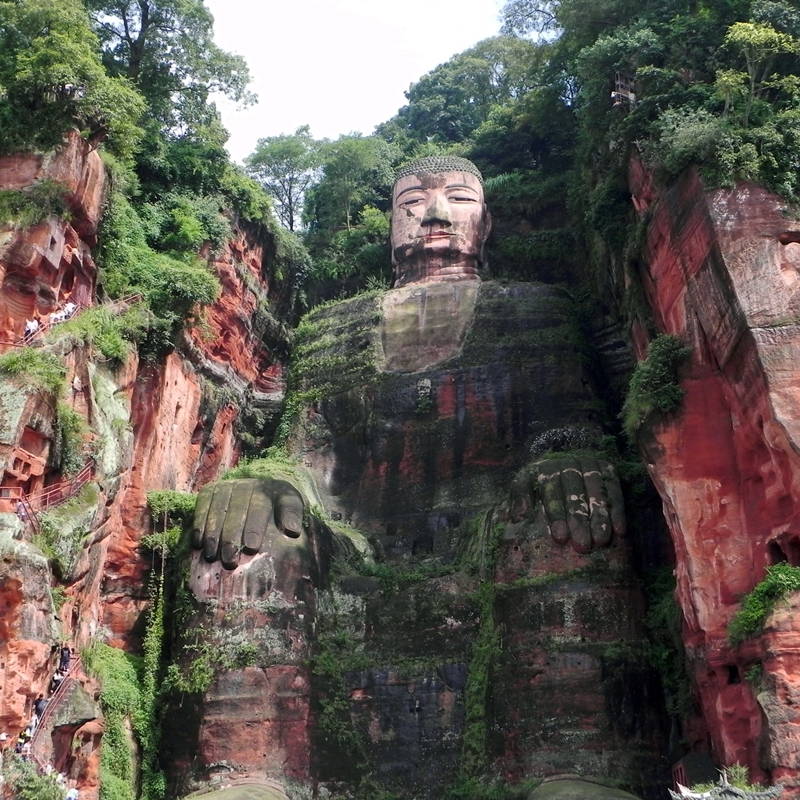 The Giant Buddha of Leshan is carved on Lingyun Hill, east of Leshan City, which is not far away from Mount Emei. The solemn Buddha is 71 meters high and its head itself is 14.7 meters high. Its ear is 6.2 meters long, eye 3.3 meters wide, and shoulder 34 meters wide. Its head is covered with 1,021 chignons. Its middle finger is 8.3 meters long, and each of the feet are 11 meters long and 8.5 meters wide, large enough to accommodate more than 100 people sitting on it. The huge figure sits with his hands resting on his knees, his head reaching the hilltop and his feet the river, occupying the entire hillside. 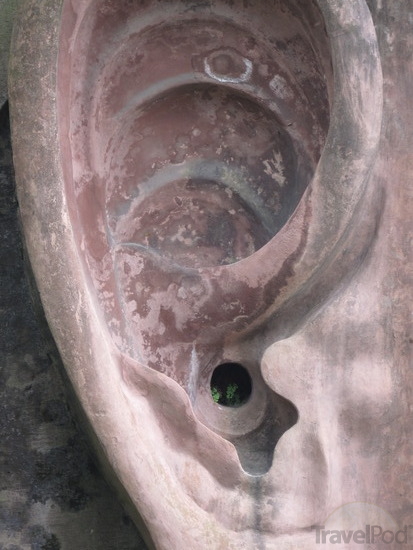 Construction was started in 713, led by a Chinese monk named Haitong. He hoped that the Buddha would calm the turbulent waters that plagued the shipping vessels traveling down the river. When funding for the project was threatened, he is said to have gouged out his own eyes to show his piety and sincerity. After his death, however, the construction was stuck due to insufficient funding. About 70 years later, a jiedushi decided to sponsor the project and the construction was completed by Haitong's disciples in 803. Apparently the massive construction resulted in so much stone being removed from the cliff face and deposited into the river below that the currents were indeed altered by the statue, making the waters safe for passing ships. 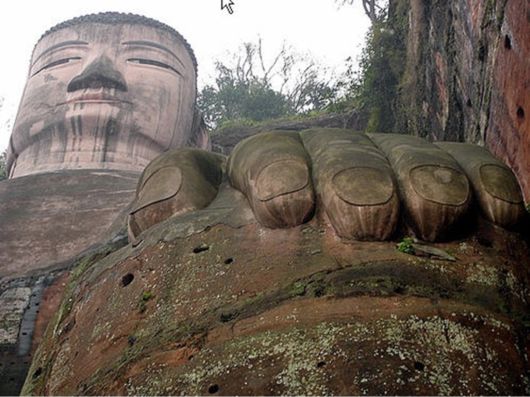 A sophisticated drainage system was incorporated into the Leshan Giant Buddha when it was built. It is still in working order. It includes drainage pipes carved into various places on the body, to carry away the water after the rains so as to reduce weathering.

When the Giant Buddha was carved, a huge thirteen story wooden structure, plated in gold, was built to shelter it from rain and sunshine. This structure was destroyed and sacked by the Mongols during the wars at the end of the Yuan Dynasty. From then on, the stone statue was exposed to the elements.

The Leshan Buddha has been affected by the pollution emanating from the unbridled development in the region. According to Xinhua news agency, the Leshan Giant Buddha and many Chinese natural and cultural heritage sites in the region have seen degradations from weathering, air pollution, and swarms of tourists. The government has promised restoration work. 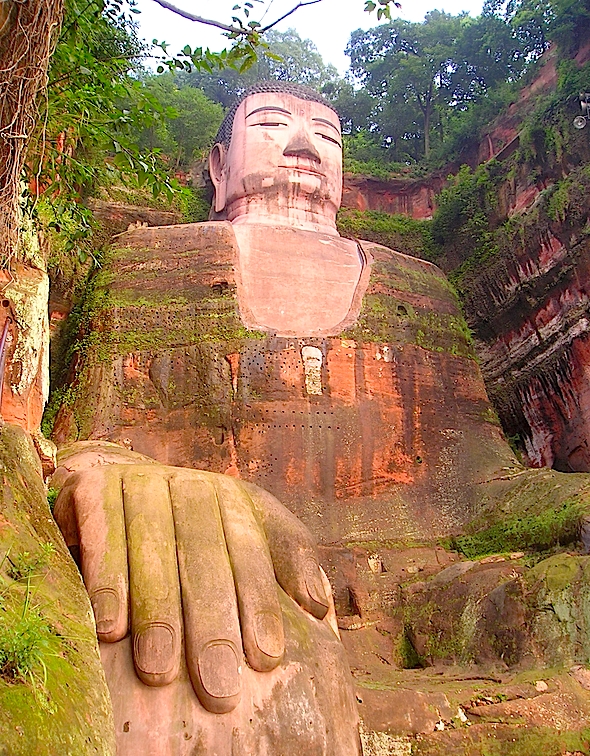 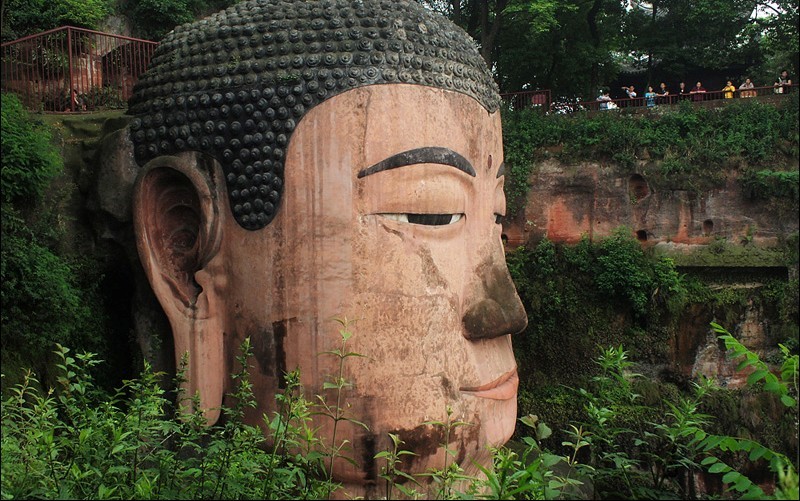 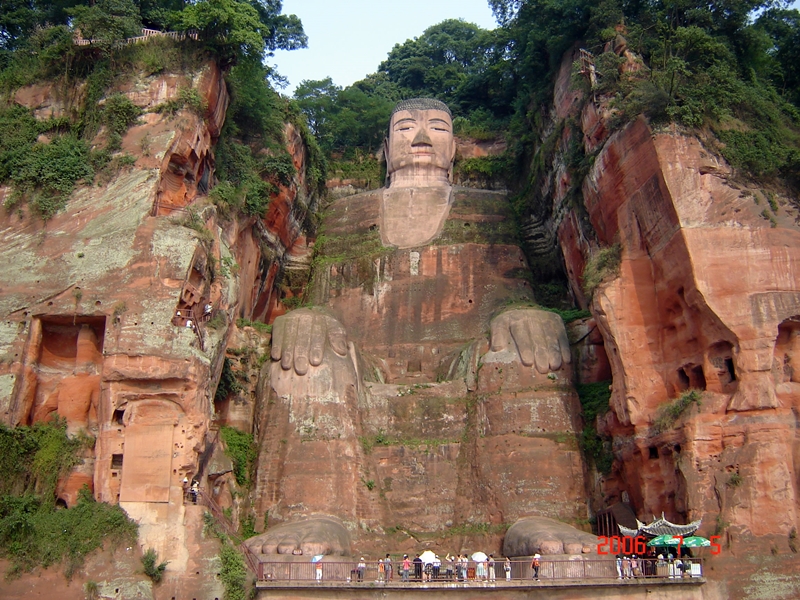 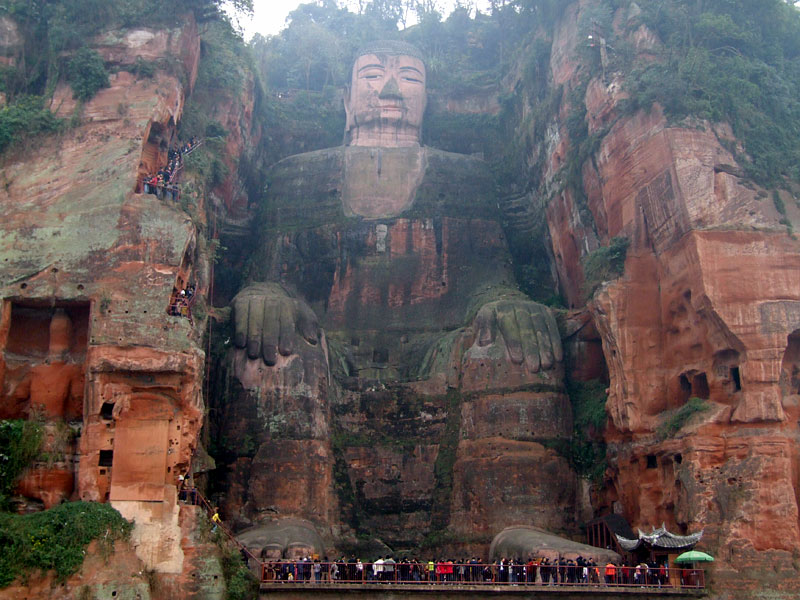 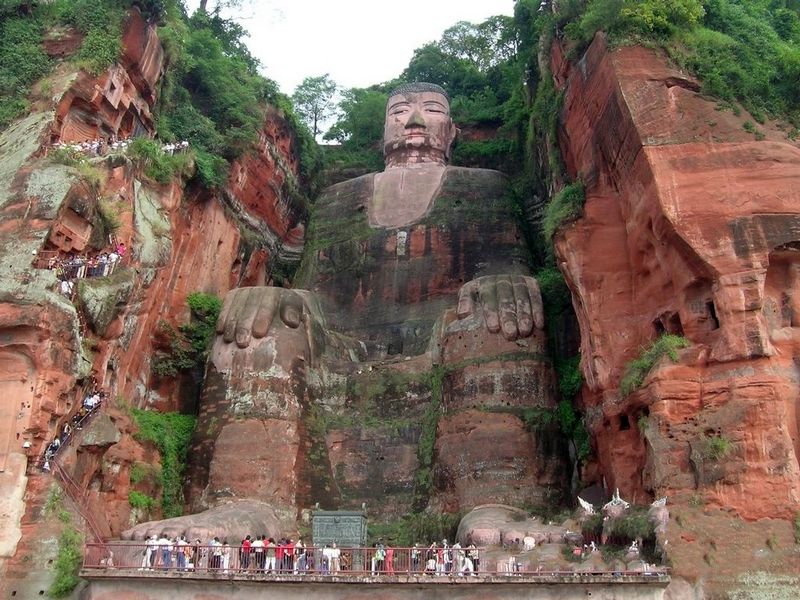 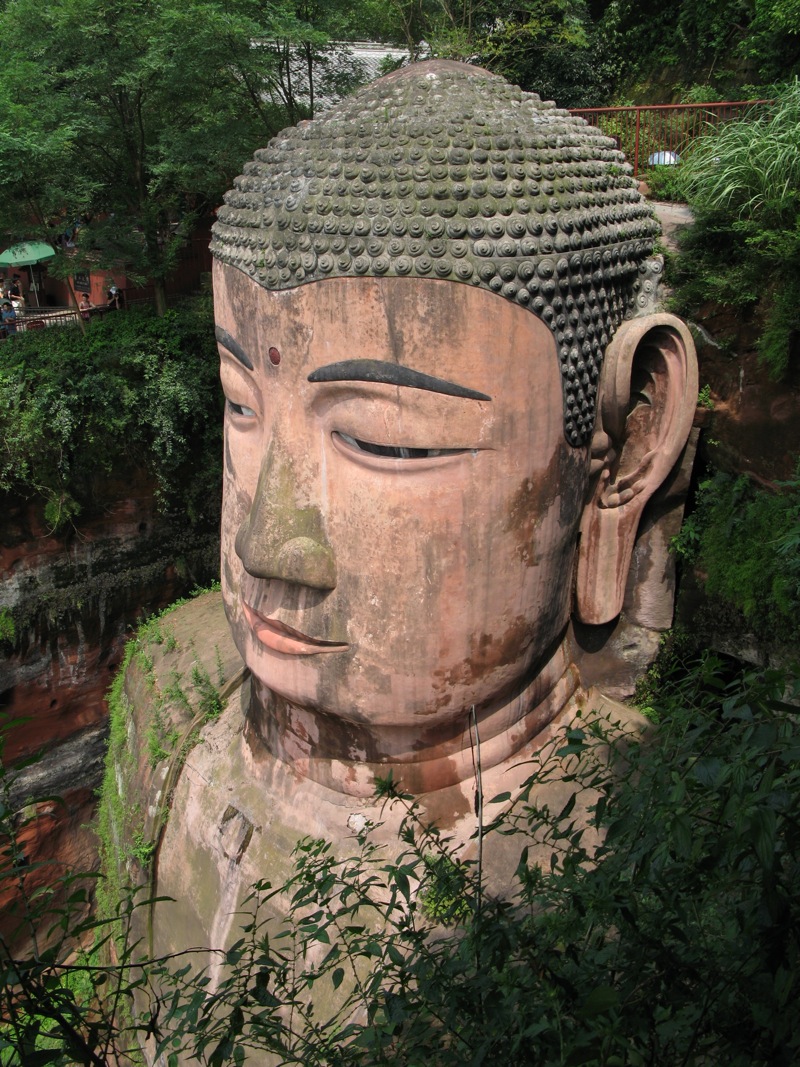 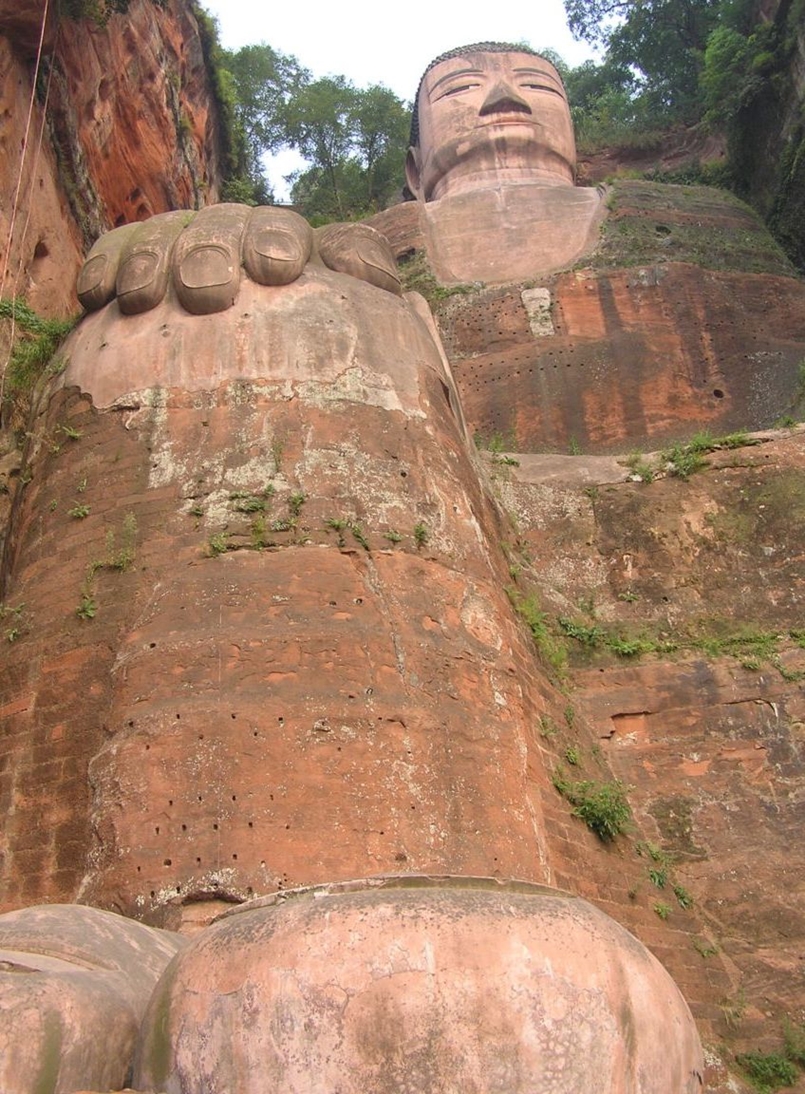 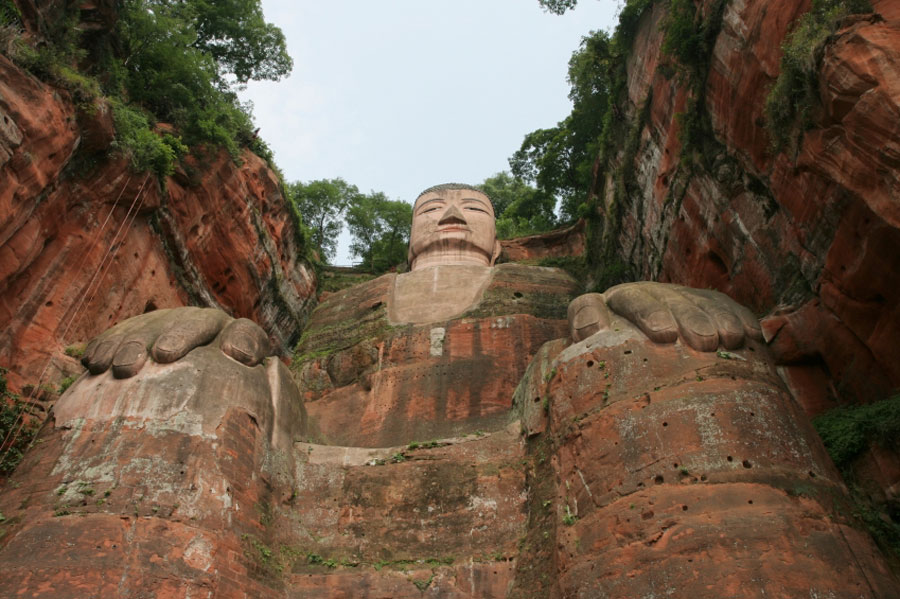 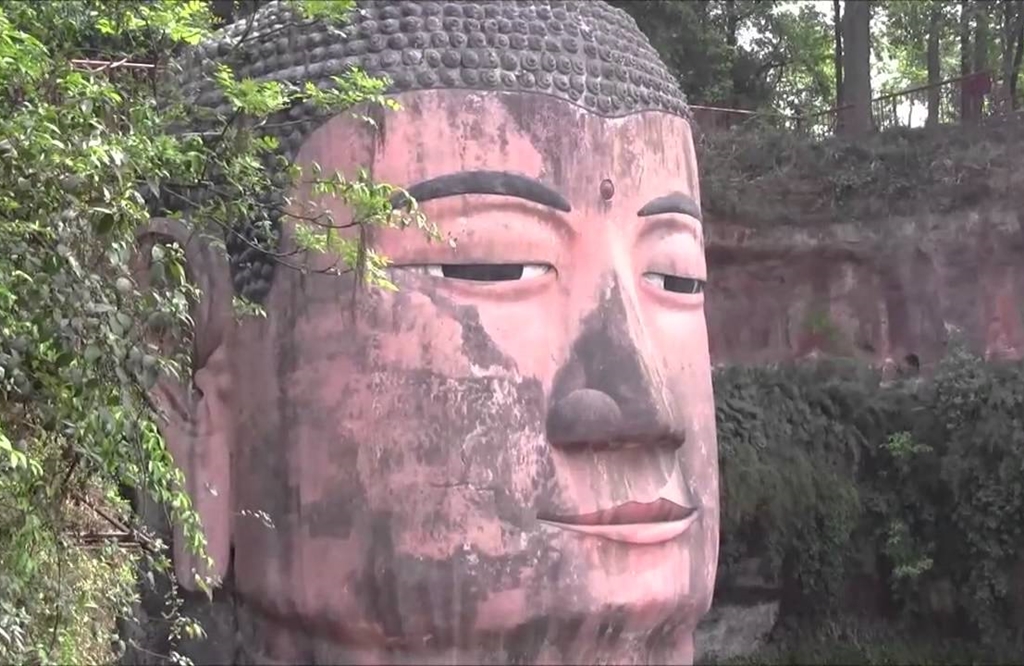 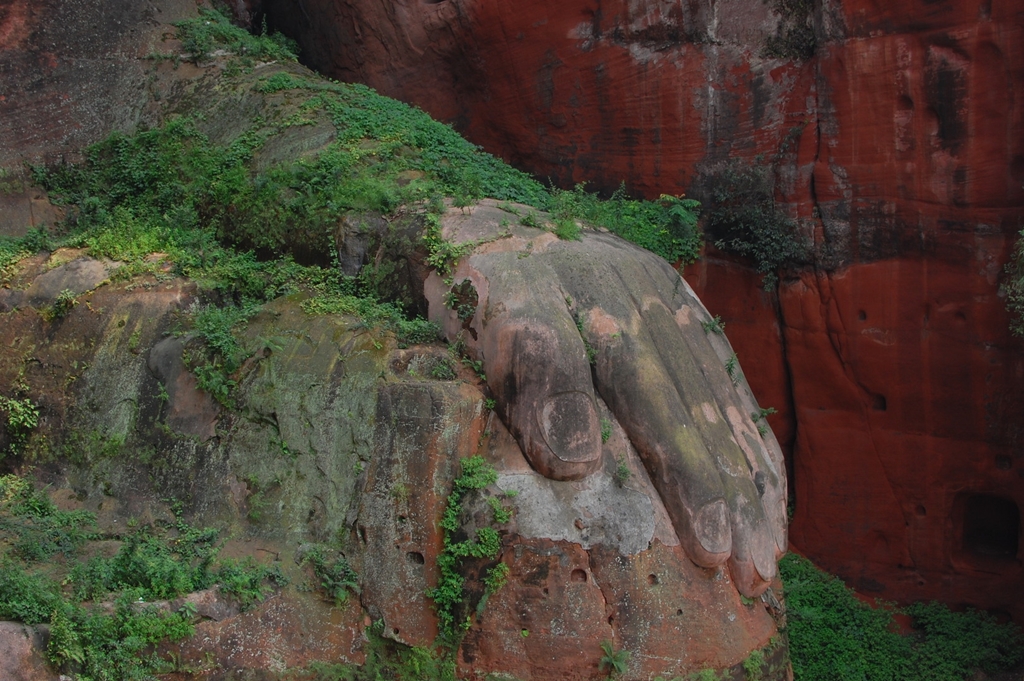 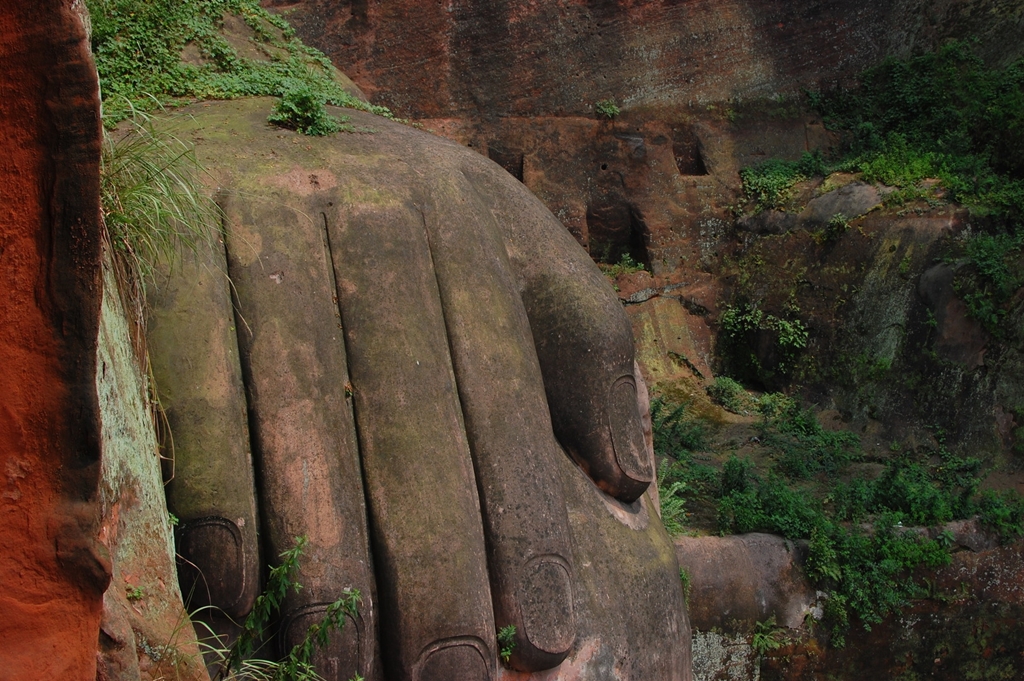 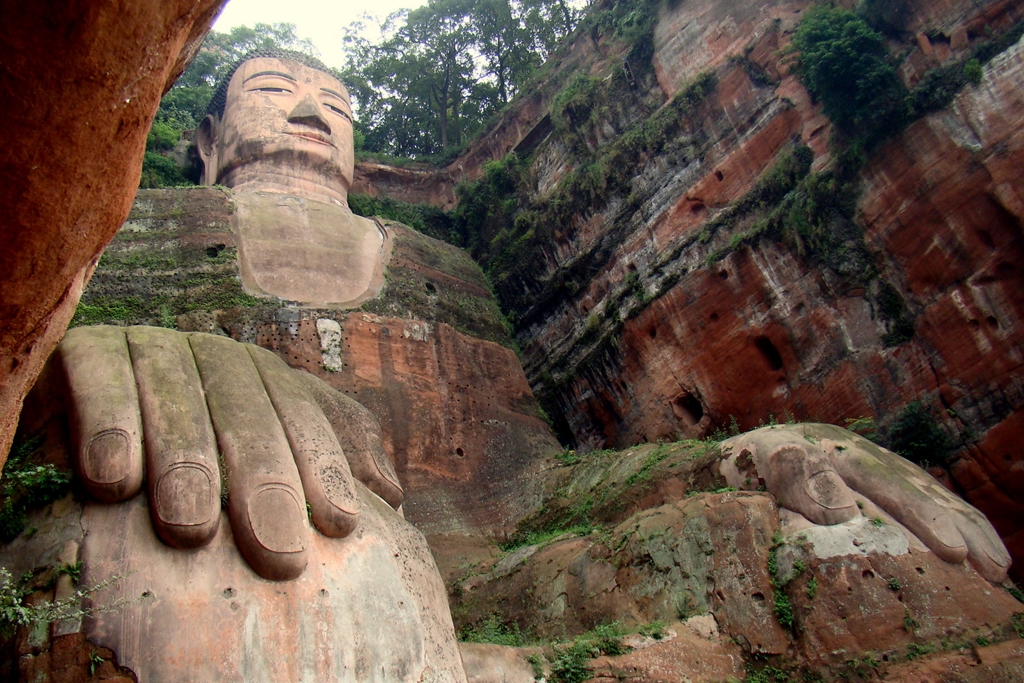 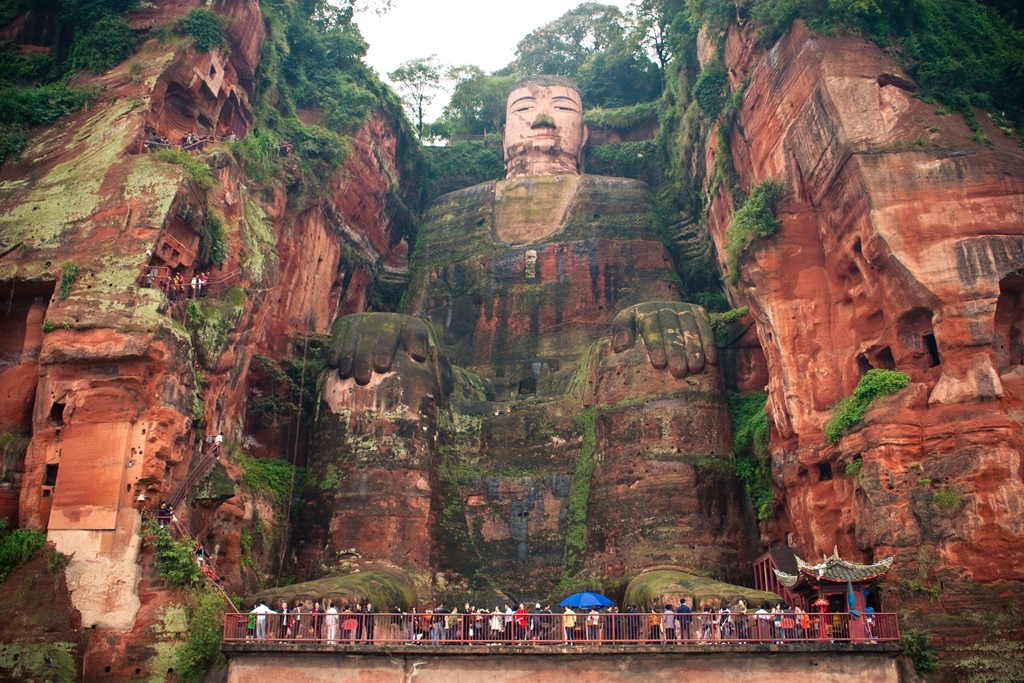 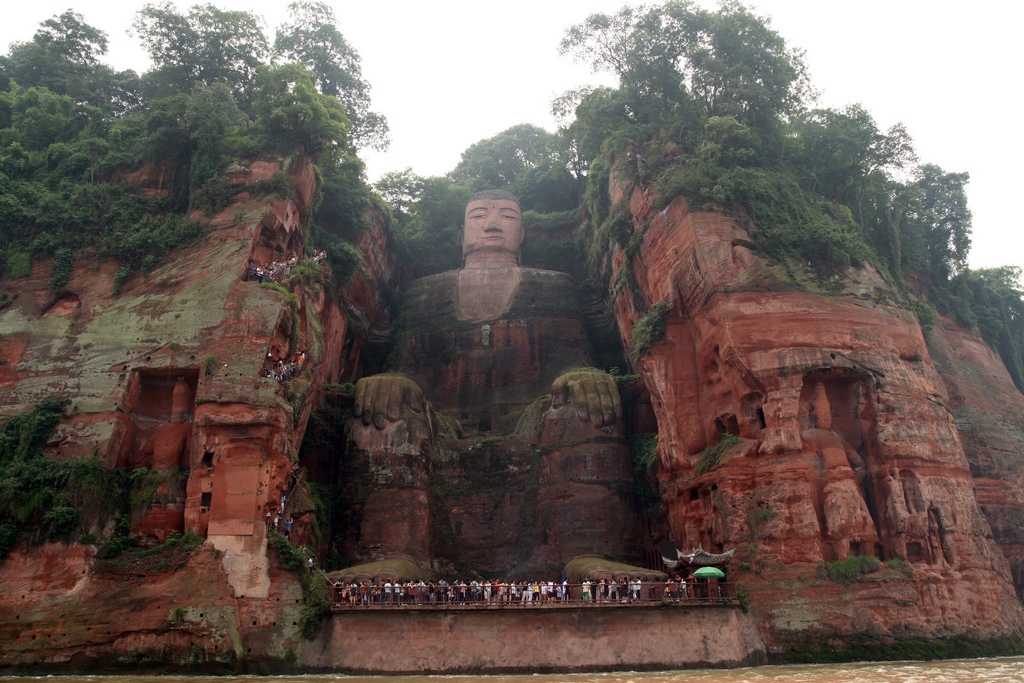 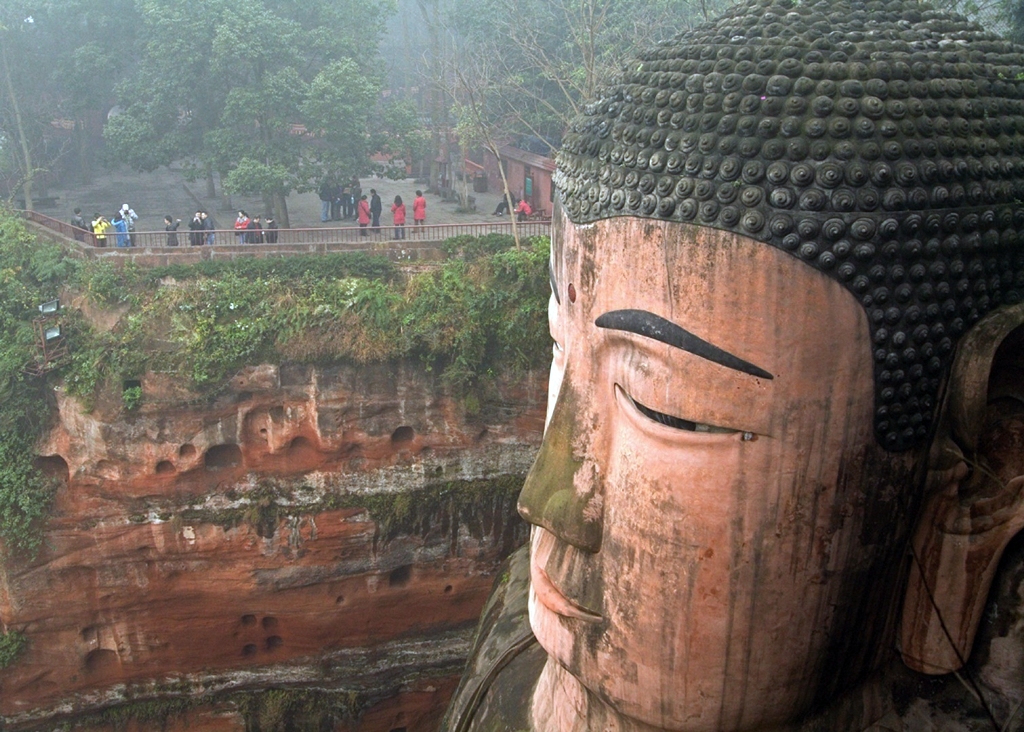 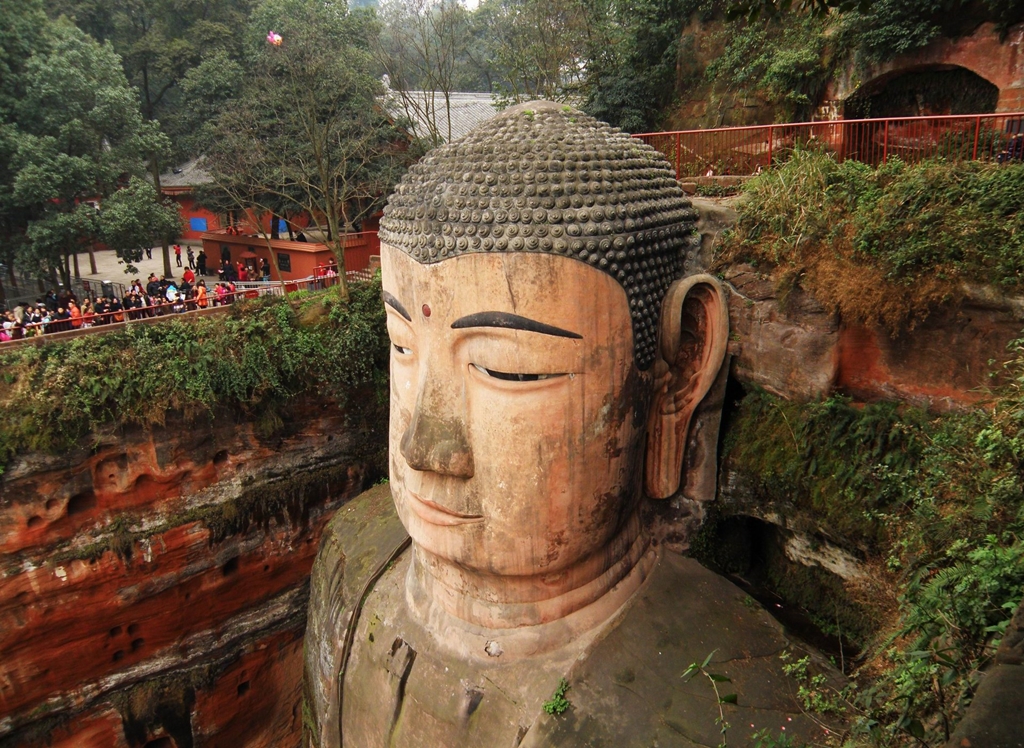 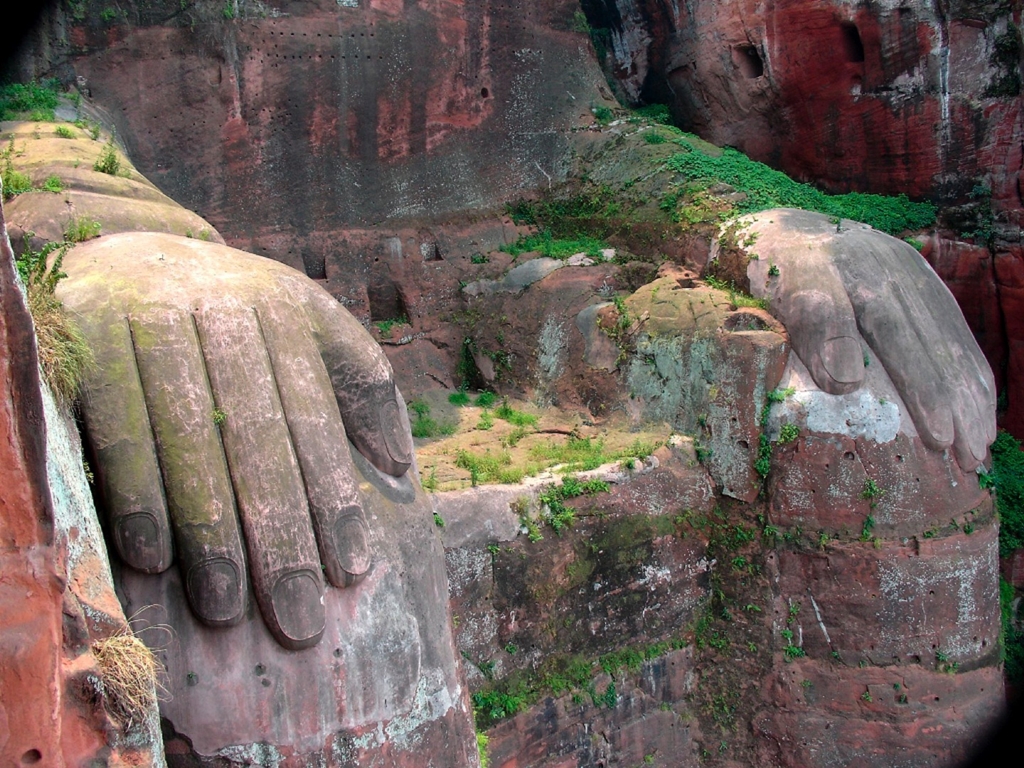 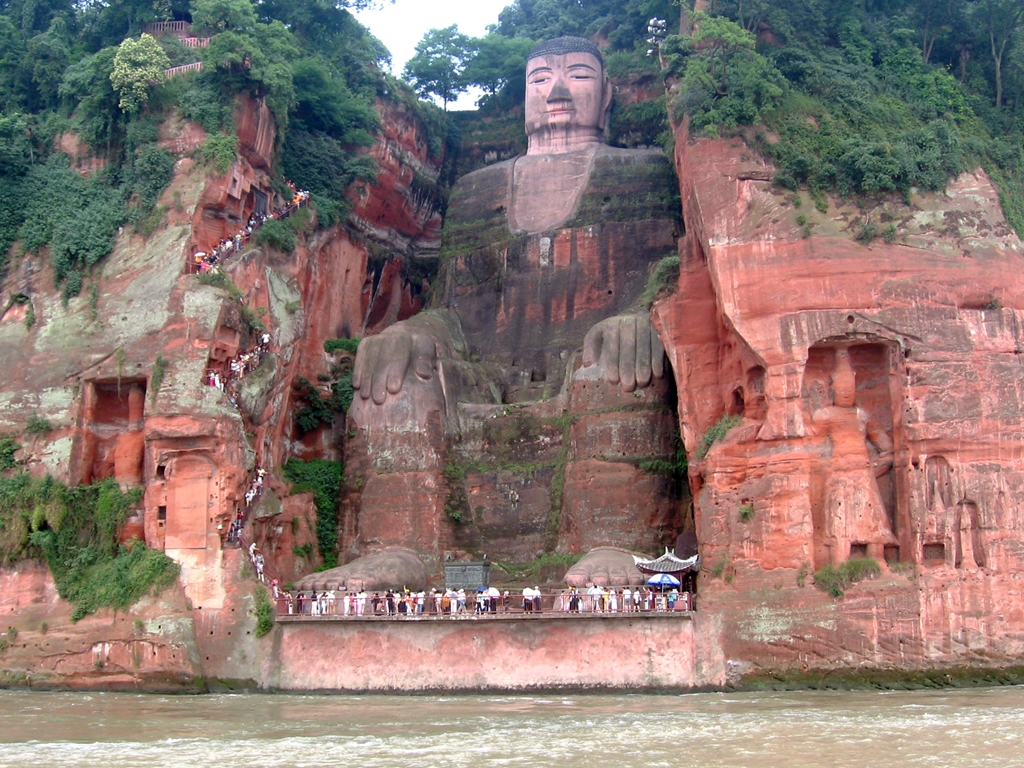 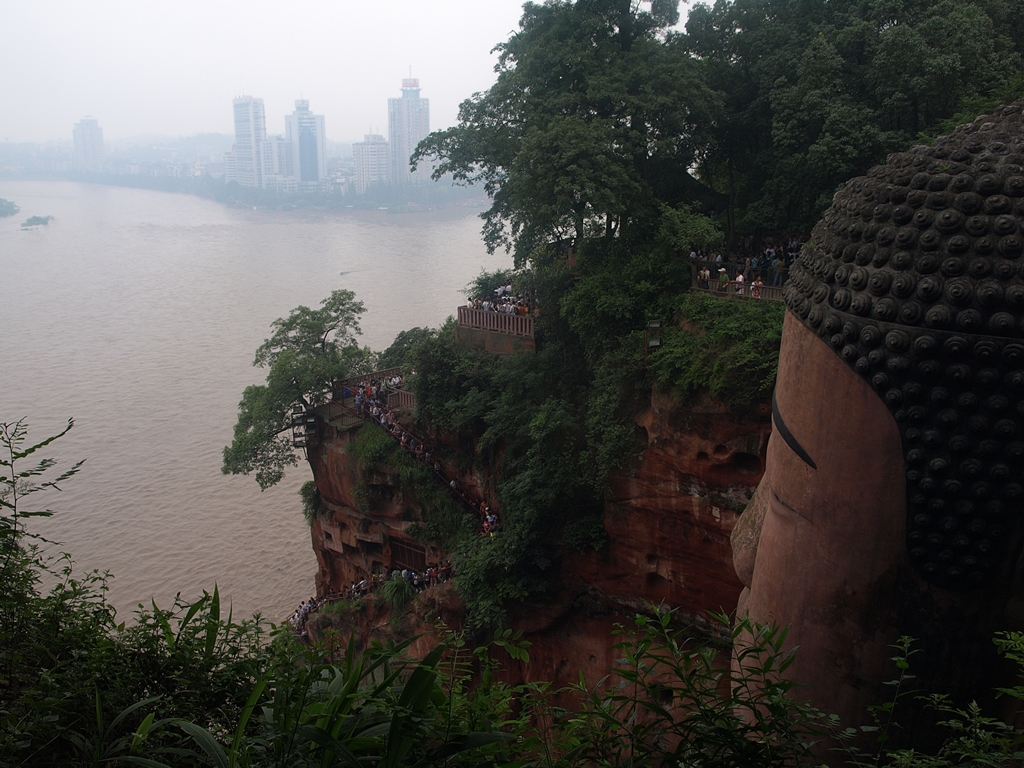 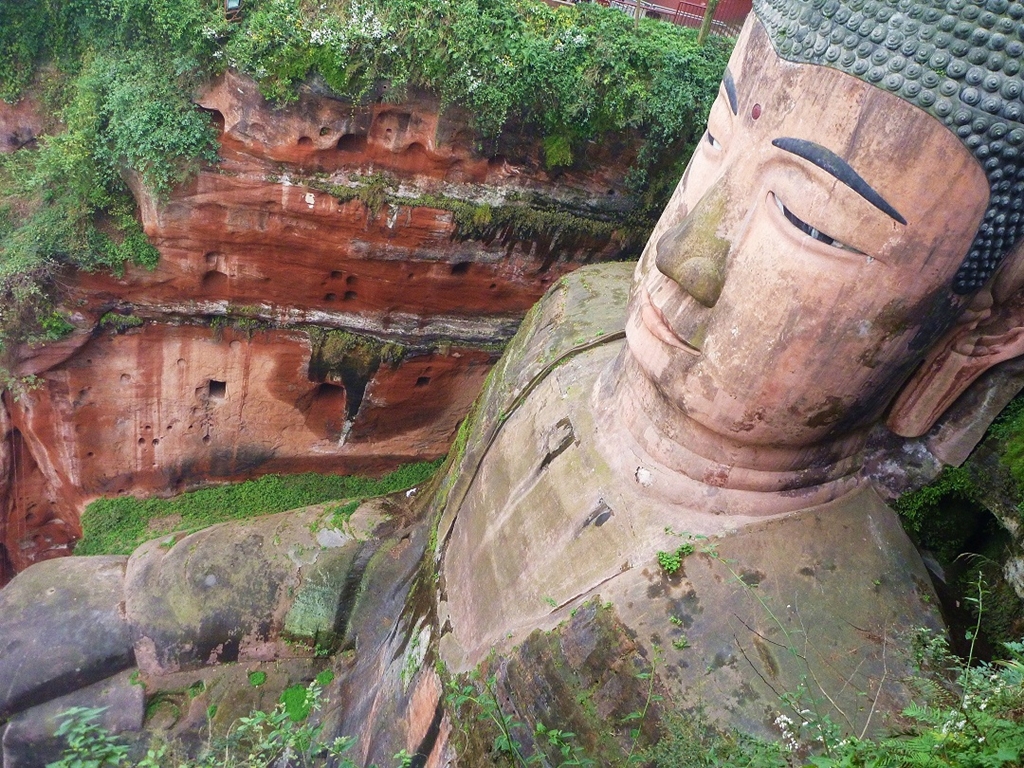 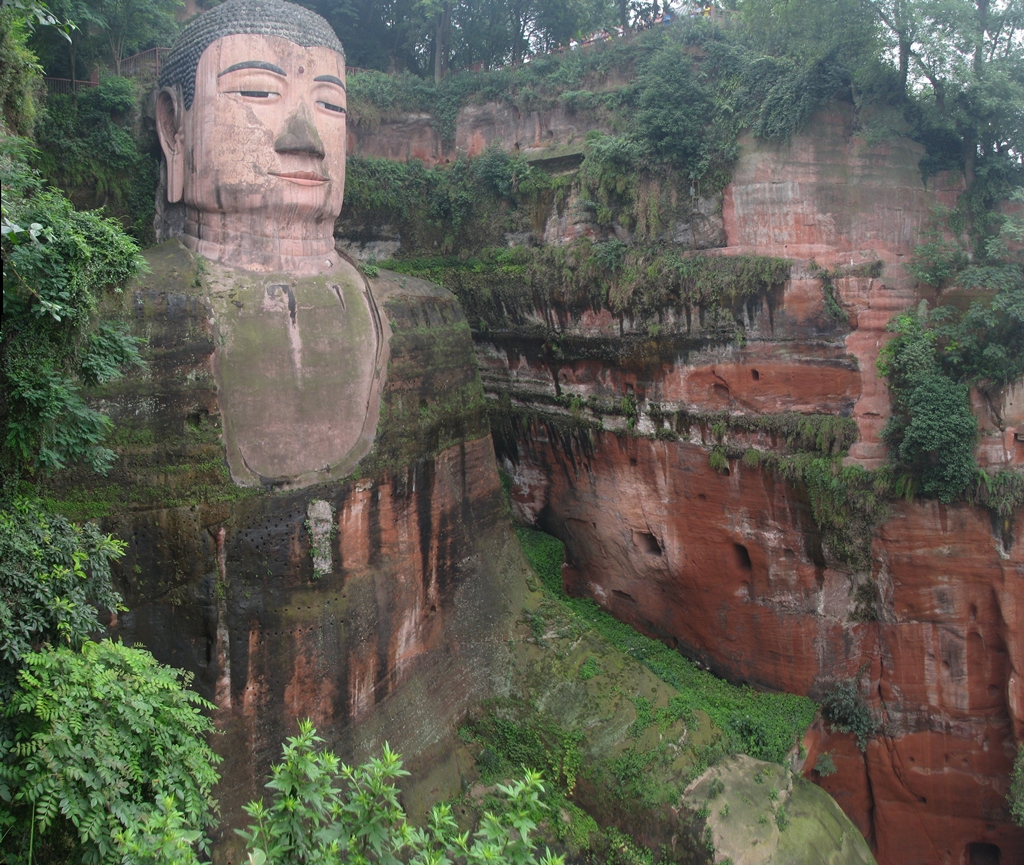